The Jetsons Wiki
Register
Don't have an account?
Sign In
Advertisement
in: Gadgets, The Jetsonian A to Z 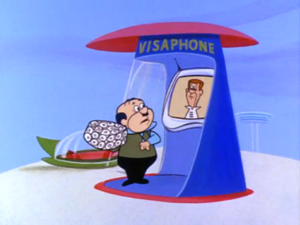 A Visaphone is a video phone booth that Mr. Spacely used to apologize to George about the pineapple cake incident and told George to bring back Rosey the robot.

In the Real World

The Visaphone is probably based on the Video Phone used at the 1964 World's Fair in New York.