You may also be looking for Uniblab, the character.

Uniblab is the tenth episode of Season One of The Jetsons.

When George Jetson is expecting to get a promotion at Spacely Sprockets he is surprised that Mr. Spacely hired a smart robot named Uniblab to be Georges replacement and this annoyed George and the robot takes Georges money in a gambling bet. When George gets home his family throws him a surprise party but George is unhappy because he didn't want his family to know the truth so he goes to Henry Orbit and tells him his problem at work. Later on at work Mr. Spacely decides to lay George off from his job and Henry Orbit decides to help George in sabotaging Uniblab the robot. Henry adds spring tonic beer into the robot's fuel, causing Uniblab to malfunction and act drunk during a presentation. Spacely eventually calls Jetson for help when Uniblab attempts to fire him; afterwards Jetson rips out the robots cable and gets his job back. 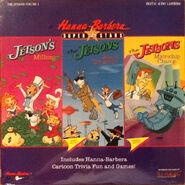