The Simpsons is an animated television show. It has spoofed The Jetsons a number of times.

121 "A Star Is Burns"
Announcer: "Coming up next, The Flintstones Meet The Jetsons."
Bart: "I smell another cheap cartoon crossover."

189 "All Singing, All Dancing"
The couch gag spoofs the out-of-control treadmill in the credits.

455 "Replaceable You"
Roaming robopets stop to watch TVs with Rosey and George on them.

The Simpsons As The Jetsons (2015)
566 "My Fare Lady"
The first scene is a parody of The Jetsons opening.
Add a photo to this gallery

Issue 60
Homer says his job is the same as George Jetson's.
Add a photo to this gallery 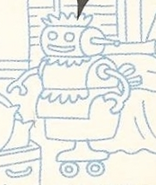 Homer Simpson's Little Book of Laziness
The Sitter-Bot bears a striking resemblance to Rosey.
Add a photo to this gallery
Retrieved from "https://thejetsons.fandom.com/wiki/The_Simpsons?oldid=8799"
Community content is available under CC-BY-SA unless otherwise noted.