The Jetsons Wiki
Register
Don't have an account?
Sign In
Advertisement
in: Merchandise, 1990, The Jetsonian A to Z

The Jetsons Cereal was a cereal made by Ralston. It was first produced in 1990 in conjunction with the release of Jetsons: The Movie in theaters that same year. 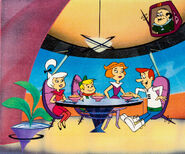