The Jetsons Wiki
Register
Don't have an account?
Sign In
Advertisement
in: Media, Television series, The Jetsonian A to Z 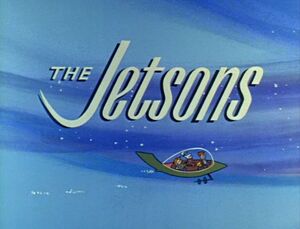 The Jetsons is an animated sitcom that was produced by Hanna-Barbera. It was Hanna-Barbera's space age counterpart to The Flintstones. Like the former show, it is a half-hour family sitcom projecting contemporary American culture and lifestyle into another time period. While The Flintstones live in a world with machines powered by birds and dinosaurs, the Jetsons live in a futuristic utopia in the year 2062 of elaborate robotic contraptions, aliens, video phones, holograms, jetpacks, hoverboards, flying cars, space travel and whimsical inventions.

The original incarnation of the series was a single season of 24 episodes aired Sunday nights in prime-time on ABC from 23 September 1962 to 3 March 1963. Then in 1985, Season Two with 41 episodes was produced, and later, in 1987, Season Three with the final ten episodes was made. Soon afterwards, three animated movies of The Jetsons were made, The Jetsons Meet the Flintstones (1987), Rockin' with Judy Jetson (1988), and Jetsons: The Movie (1990).

In the first season, the series was produced and directed by William Hanna and Joseph Barbera. When the Warner Bros. Cartoons studio closed in May 1961, several of its animators, including Gerry Chiniquy and Ken Harris, also joined Hanna-Barbera to work on the first season.