Test Pilot is the fifteenth episode of Season One of The Jetsons.

Mr. Spacely's scientist invents an indestructible suit that will protect people from dangerous objects. But then Mr. Spacely's rival W.C. Cogswell's scientist also invents the same indestructible suit. Meanwhile at the Skypad Apartment, George tells his family that they need to budget their money and that Jane is spending too much money. Later at work Mr. Spacely sends George to the doctor named Dr. Radius for a physical exam checkup. Dr. Radius sends the little flying robot inside George's body to scan inside his body. When the robot shoots out of George's ear and into the mummy's body, the robot tells George that he won't live very long. Then George goes back to work, and Mr. Spacely has a discussion about who will test out the protective suit. George volunteers to be a test pilot for the dangerous job of testing out the suit, W.C. Cogswell visits Spacely, and they both compete for George by giving him job offers, but Mr. Spacely kicks Cogswell out of his building. Later on George tells his family to go on a shopping spree. Then George has to survive the test runs before getting promoted to being Spacely's vice president and before selling the invention.

Before the last test, which involves having two missiles shot at George, Dr. Radius arrives, telling him that his early death wasn't true, as he found the robot in the mummy's body. The final test proves to be a success as well, with George and his family beginning to celebrate their new wealth. However, when Mr. Spacely comes by to collect the suit, the two discover the indestructible suit has been shredded when Jane put the suit in the washing machine. The two realize that the suit isn't washable. George tells his family to return all the stuff they bought in the shopping spree, before running to Cogwell's office to apply for a job there, with Mr. Spacely joining as well. 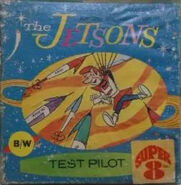