SuperGeorge is the fifth episode of Season Two of The Jetsons, and the 29th overall episode of the series.

The Jetsons buy a Thinko machine that gives out wishes temporarily. The machine breaks, giving George super strength until it's fixed. George attempts to be a superhero but causes property damage and finds out being a superhero with super strength isn't as fun as he thought it would be. Mr. Spacely fires George for destroying part of Spacely Sprockets building. A wrestling promoter hires George to fight the undefeated Jupiter Juggernaut. Mr. Spacely bets his entire fortune on Jupiter Juggernaut to win. George's superpowers give out mid-fight, causing him to lose. 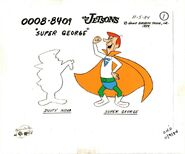