The Jetsons Wiki
Register
Don't have an account?
Sign In
Advertisement
in: Places, The Jetsonian A to Z 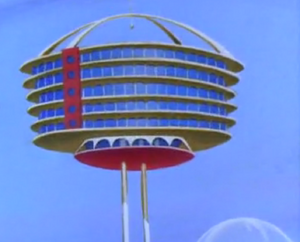 Skypad Apartments is a location in The Jetsons.

It is an apartment building in Orbit City.  Henry Orbit is the building's repairman. George Jetson and his family live there in the year 2062. The Skypad Apartments, like the rest of the city's architecture, is rendered in the Googie style. All homes and businesses are raised high above the ground on adjustable columns. Henry Orbit mentions that there are two thousand tenants in the building.[1] The Skypad Apartments can be raised above the level of bad weather to a maximum of four thousand feet.

Why do the Jetsons live in the air? Because of the Space Needle. Iwao Takamoto, a layout and design artist for The Jetsons told The New York Times in 2005 that the Space Needle inspired the skypad apartment buildings, whose stilts grew or shrunk depending on the smog or rain. The SpaceHouse is intended to stay where it is and weather the storms and extreme temperatures of the Antarctic. The Skypad apartments, as you may recall, were built on huge hydraulic central posts that could raise the living quarters above the level of bad weather.

The basic implication is one of rising above the pollution; it's mentioned in a couple of episodes. There is also the episode where Henry the super raises the building above the rain. Further, the few "downward" shots show rolling clouds beneath.

An episode of Harvey Birdman: Attorney at Law indicates that they live in elevated homes because the Earth's surface is uninhabitable. In that episode, the Jetsons' home becomes submerged by a rising sea, and mutated monsters attack it. They return to the past to sue Earth's citizenry for wrecking the entire planet. Of course, other episodes present that Earth's surface is open to parks and factories. There's a yellow building in the background, with bushes and trees around it that doesn't look damaged. The curved beams would be supporting Cogswell's building. The red circular pillar probably support Mr. Spacely's building and you can see another elevated building in the background.

There've been plenty of episodes showing the ground though, so there isn't really anything wrong with the ground. I remember one episode where a bird was walking on the ground, and another where a hospital that Rosey was in after eating a faulty lug-nut was on the ground with flowers all around it. People probably just migrated to the sky for a fresh start. Or it was just a kick in the series.

In "Private Property", Cogswell builds a building next to Spacely's, the building inspector measures the building height, and there is a shot of the end of the tape measure hitting the ground.