Rudy 2 is a character in Jetsons: The Movie. He was voiced by Ronny Schell.

Rudy 2 is a robot who engineers at the sprocket factory above the asteroid, husband of Lucy 2, and father of Teddy 2. He is a portly robot whose chrome is mostly the normal grayish-white, from his head to his waist. He wears a green cap or hardhat, glasses with one handle being red at the top and blue on the bottom, while the other has the same colors, but reversed. The frames outlining each of the lenses are blue for the top half and red for the bottom. The lenses are aqua. He has a square or rectangular mouth that when closed has a line separating top from bottom and looks like a slot, with a line on each bottom corner. His torso is designed as if he were wearing two shirts, the outer-shirt having a V-neck collar with an olive green outline, the rest of it being grayish-white, with short sleeves, a circle on each shoulder and an upside-down, triangular pocket in the front. His under shirt is blue with a gray collar, as seen within the V-neck collar. Each of his arms is gray with ridges and are normally short, though being a machine, he has the ability to stretch them, and an olive green orb for each hand with three, white fingers. His legs and feet are fused together, and are green, as if they were a pair of pants, with three white wheels on the soles.

Rudy 2 is first seen early on via video monitor bringing Mr. Spacely up to speed on the status of how things are going at the sprocket factory. When Spacely wants Rudy to carry out an order involving the sprockets, he objects and refuses, believing that it isn't a wise idea. Later, he meets George, who just got promoted to vice president and comes to the factory as his new place of employment, after the Jetsons had arrived at Intergalactic Garden Estates. They're the only two workers there, due to the assembly-line efficiency and nature of the plant being completely automated. At first, things seem to be running smoothly, but when the machine manufacturing the sprockets suddenly goes haywire, George is contacted by Spacely, who demands to know what's the hold-up. Rudy concludes that someone has been messing around with the workings. When production is disrupted and halted the second time, George decides to stay in the plant overnight to catch the saboteur or saboteurs behind this. When he asks Rudy to join him, he declines for fear of his position being on the line and stating that keeping it is more important to continue supporting his folks. Once it's discovered that the Grungees were the ones who caused the machine to go out of whack (to prevent the threat of having their domain destroyed inside the asteroid, as well as the same done to them), Rudy meets with Spacely when he comes to see for himself and get attempts to start it up again. Rudy shuts down the operation and tries to warn him about the havoc it's wreaking. Angered and vexed at his interference, Spacely then has Rudy shut down when he disconnects him and restarts the operation. Following a near disaster, Spacely is then confronted by George and the others, who reveal what the work in the factory above the asteroid has been doing. Rudy 2 reappears when everyone has a discussion with Spacely on what can be done and how to carry on making the sprockets without endangering the Grungees' world, which is done successfully with the creatures now in charge of the plant. Rudy 2 is seen once more with his wife and son, the Furbelows, Apollo Blue and the Grungees near the end, when everyone says their goodbyes to the Jetsons, and Rudy extends his arm to George for a handshake, and thanks him. 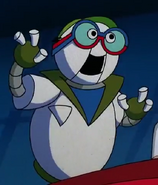