Rosie Come Home is the second episode of Season Two of The Jetsons, and the 26th overall episode of the series.

One day, while Elroy and Orbitty are playing in his room, Rosey, who is cleaning Elroy's room, bumps into Astro. Then, she crashes into Elroy's toy tower. When George arrives at their home, he sits down, lies on the pillow, and starts reading the newspaper. Rosey comes in with a vacuum cleaner. George tells her that he wants to put on his slippers. She takes his slippers out of a compartment on her chest, but they are broken. Just then, Mac arrives, giving Rosey a bunch of flowers, but she gets angry, says, "Get lost!", and closes the door, breaking the flowers. Elroy and Astro tell Rosey that this is unusual behavior from her as she usually thinks Orbit Robots is "spacey". Meanwhile, Mac is very sad, and he starts to cry, but Henry Orbit tries to console him by having him tell him about it.

The family is excited about dinner, they are eating a green, amorphous dish called "Venusian vegetable delight", but the Venusian delight is dirty. They say, "Yuck!" and are very upset. Even Astro is upset too. Judy and Elroy have an idea, they tell George about Henry Orbit, who they think might have the solution to Rosey's strange behavior. George meets Henry in the garage and tells him about Rosie. Henry finds Rosey's owner manual disc and puts it in to listen to the disc. Henry asks George if he can keep Rosey until nighttime. At night, Rosey meets George again, while he's checking her odometer, since he can't ask Rosie her mileage as "it's not polite to ask a lady her age". She gives him Venusian delight again and George says, "Yuck!", and goes to bed, drinking water with pills.

The next morning, George and Jane go to the Robot City shop to meet the salesman. He and she want to buy a microchip master cylinder. Rosey tells Cosmo G. Spacely all about George while Spacely is having lunch and waiting for a long time. Rosey races away and hits Cosmo's foot. She is walked out of Spacely Space Sprockets. Meanwhile, the salesman wants to sell Mechano Maid 2000 to George and Jane, they want to meet her. When Rosey comes back to the Robot City, she is terrified. George and Jane, the salesman and Mechano Maid 2000 are very busy. Rosey is very worried and sadly goes back to their home before running away.

Inside the Jetsons' home, Rosey is very sad, then she puts a picture frame in her circuit. Astro is still sad about saying goodbye and he begins to cry. Rosey wipes Astro with a tissue. She decides to write a paper for him and he reads goodbye. Astro cries, "Ran't read!" Orbitty starts to cry too, then, Rosey runs sadly away. Inside Spacely Space Sprockets, Cosmo yells, "Jetson! You're two hours late!" and George tells him about the trouble he had and about Rosey running over Cosmo's feet. Jane Jetson calls to George about Rosey quitting, and he races away as fast as he can, but Cosmo is still cross and yells, "But Jetson, you just got here!"

Jonny Omega
(only appearance; no lines)

Rosie, have you seen my slippers?

Astro, have you seen Orbitty? 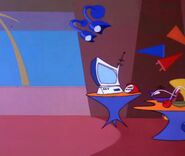 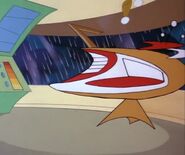 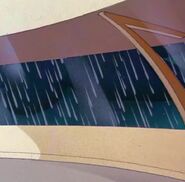 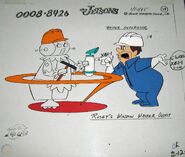 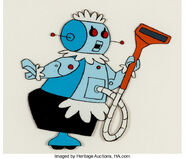 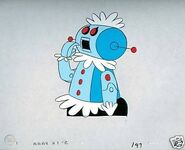 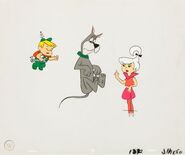