The Jetsons Wiki
Register
Don't have an account?
Sign In
Advertisement
in: Episodes, Episodes of Season One, The Jetsonian A to Z, 1962

Joseph Barbera
William Hanna
Rosey the Robot is the first episode of the first season of The Jetsons. It first aired 23 September 1962 on ABC.

Between malfunctions and pressing too many buttons, Jane wants a robot maid, but George can't afford it.

Daddy? Daddy, are you asIeep? 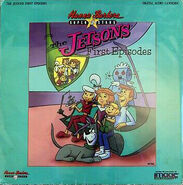