Orbitty is a character in The Jetsons.

He is an alien of Satellitus craterus orbitus, an endangered species which has spring legs and suction cup feet. He and his kind have the special ability to turn various colors, depending on their mood, such as red when angered or modest, blue when saddened, or yellow when frightened. Their special ability can also be useful for tracking something, though the range of colors they change is only limited to red and blue when doing so, as red indicates warm/hot and blue indicates cold. He also possesses some degree of technical knowledge, as he is able to take things apart and then put them back together again.

Orbitty was picked up as an egg by Elroy Jetson. He hatched in the Jetson's house and then became a member of the Jetson family. 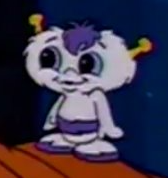 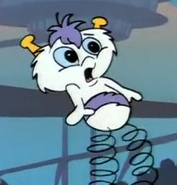 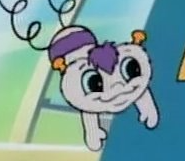 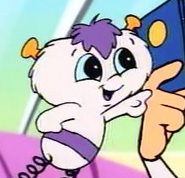 Orbitty in One Strike, You're Out 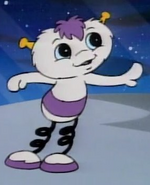 Orbitty in Judy Takes Off 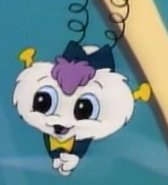 Orbitty in The Cosmic Courtship of George and Jane 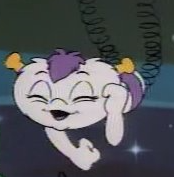 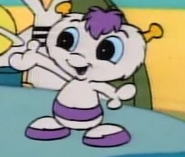 Orbitty in Little Bundle of Trouble 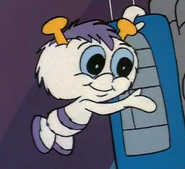 Orbitty in Elroy in Wonderland 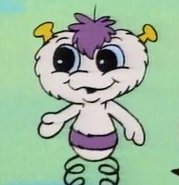 Orbitty in The Swiss Family Jetson 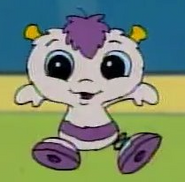 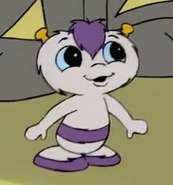 Orbitty in The Wrong Stuff 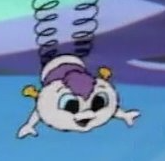 Orbitty in To Tell the Truth 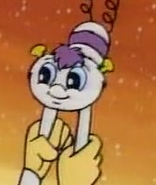 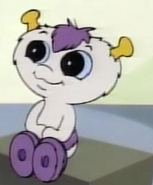 Orbitty in The Century's Best

Orbitty in A Jetson Christmas Carol

Orbitty in Two Many Georges

Orbitty appears in Harvey Birdman, Attorney at Law
Add a photo to this gallery

Orbitty laughs in A Jetson Christmas Carol (December 13, 1985)
Add a photo to this gallery

Retrieved from "https://thejetsons.fandom.com/wiki/Orbitty?oldid=14061"
Community content is available under CC-BY-SA unless otherwise noted.