The Jetsons Wiki
Register
Don't have an account?
Sign In
Advertisement
in: Films/Specials, 1990, The Jetsonian A to Z

Jetsons: The Movie is a film released 6 July 1990 by Universal Pictures.

It featured the final voice roles of George O'Hanlon and Mel Blanc (who had both died during the production of the film) and it was dedicated to both of their memories.

Spacely Sprockets and Spindles has opened a new mining colony on an asteroid.

The proposed project is meant to produce product at 1/10 the cost of making the items on Earth, however, the factory continues to be sabotaged by someone or something.

As Mr. Spacely checks up on the "Orbiting-Ore Asteroid" again, the latest head of the factory, Alexander Throttlebottom, has run off, making it four managers of the new plant that Mr. Spacely has lost so far.

Fearing for his company (and profits), Mr. Spacely names George as Throttlebottom's successor and sends him and his family to the plant.

While the family is thoroughly upset from having to have been thrown from their normal lifestyle (and the plans that they had that day), they set up apartments on the adjoining apartment community to the Asteroid and its neighboring shopping complex.

While it takes the family some time to adjust, Elroy meets a robot boy named Teddy-2 whom he first is at odds with, but eventually befriends.

Teddy-2's father, Rudy-2 is the plant engineer and shows George around.

Meanwhile, Judy is having a hard time adjusting, and accepting the fact that she lost her chance at a date with rock star Cosmic Cosmo (which a friend of hers later takes), but she soon feels better after meeting a teenage boy named Apollo Blue.

George soon figures he's ready to set the plant running again and Mr. Spacely is all set to see the plant working full-throttle, and soon to churn out the 1,000,000th Spacely Sprocket, however, the opening day festivities give way to panic as the factory is sabotaged once again.

Over the next several days, George and Rudy-2 try to fix things, but the problems persist, to the point that Mr. Spacely heads on up to check on things.

Thinking that he has to take charge, George stays overnight, only to fall asleep and be taken off by the mysterious saboteurs.

Elroy, Teddy-2 and their neighbor Fergie Furbelow sneak into the plant & meet Squeep, who is a member of an adorable-looking alien race known as Grungees.

Squeep tells them that the factory is actually drilling into his people's community which is based inside the asteroid.

Soon, Jane, Judy, Apollo, Rudy-2 & Astro show up, and realize what is happening as well.

George is found hog-tied in the Grungee's colony and soon realizes just what the factory is doing, but Mr. Spacely doesn't

Seeing that his factory at a stand-still, he starts it up (after disconnecting Rudy-2, who tries to stop him), nearly burying Elroy and Squeep alive under the rubble and prompting everyone in the asteroid to get top-side where George manages to shut down the factory and show his boss exactly what he's doing.

After talking, when George finally stands up to his boss, telling him that all he cares about is money, they come to an agreement: the Grungees will run the plant, and create new Spacely Sprockets through recycling old ones (thus stopping the further destruction of the Grungee's homeworld). Spacely Sprockets reaches the 1,000,000th sprocket.

When George asks about being the vice president, Mr. Spacely retorts, stating that "he's lucky that he'll be getting his old job back," but only when pressured by everyone else, he reluctantly promotes him to vice president (without a raise).

However, George knows that with the Grungees now running the plant, he is no longer needed as head of the Asteroid and will have to return home.

The Jetsons then bid their new friends a tearful goodbye (including Fergie who attempted to stow away aboard the Jetsons' ship). They then head back to their apartment on Earth.

As the family passes over the factory, the Grungees arrange themselves to form the words: "THANKS GEORGE" as a final grateful goodbye to George for saving their home.

The film features roughly the same voice cast as the television series except for Judy and Elroy.

Daws Butler (who was the original voice of Elroy) had died in 1988 & the voice was provided by Patric Zimmerman.

Janet Waldo (who was the original voice of Judy Jetson) recorded the part for this film but her voice was later replaced by then-pop singer Tiffany.

Studio executives hoped that Tiffany would attract a younger audience. Janet Waldo continued to voice the part in subsequent Jetsons productions. A few of Waldo's lines as Judy still ended up in the film, notably a few "Yay, Daddy"'s and her scream when falling in the holographic center and also her response to Apollo Blue asking if she was all right.

Displeased with the casting change, voice director Andrea Romano had her name removed from the finished film.

In the mid-1980s, George O'Hanlon suffered from a stroke, so when he made the later "Jetsons" series and the film, he was practically blind & had very little short-term memory, so he had to have each line spoken to him so he could repeat it back.

A few moments before George O'Hanlon's death, he recorded all of his dialogue for George Jetson. According to voice director Andrea Romano, George had suffered from a second stroke & found it difficult to read & hear and in the end, he died in the recording studio doing what he loved to do.

The movie was scheduled to be released in 1989, but it was delayed in order to avoid competition with Disney's movie The Little Mermaid, United Artists' movie All Dogs Go to Heaven (which were both released on the same day) and Universal Pictures' movie Back to the Future Part II.

Universal Pictures released the movie The Wizard in its place.

Wendy's restaurants had a Jetsons kids' meal tie-in. When clips were shown on TV, scenes with George had re-dubbed lines from an unnamed voice actor. The commercials showed Wendy's founder Dave Thomas either in a theater watching the film or at his restaurant promoting the film.

A tie-in simulator ride titled "The Funtastic World of Hanna-Barbera" opened with Universal Studios Florida one month before the film's release. In it, William Hanna and Joseph Barbera state that Elroy Jetson will star in their next project (presuming the film), which angers Dick Dastardly & Muttley and causes them to kidnap him and Yogi Bear and Boo-Boo must save him by riding through the worlds of the Flintstones, Scooby-Doo, and the Jetsons. Merchandise based on the film was sold at the ride's gift shop.

The movie was also a box office disappointment, mainly because of opening in fewer theaters.

It ended up grossing just $20,305,841 in the United States, but the movie performed much better on home video and was routinely seen on television.

The movie received mainly negative reviews from critics (resulting in an 21% rating on Rotten Tomatoes).

The movie was often both criticized and praised for its messages about protecting the environment and observing ethical practices when doing business in developing countries.

It is also noted for its early use of CGI including digital ink and paint (which had been used in films such as Disney's "The Black Cauldron," "The Great Mouse Detective," "Oliver & Company" and "The Little Mermaid" & also in Hanna-Barbera's own TV productions in the 1980s).

The animation artwork follows the lead of the series in its art direction and character designs although additional flourishes such as full animation and form shadows on the characters were added for the film.

Siskel & Ebert gave this film two thumbs down, citing both the story and the animation as having "no imagination whatsoever."

The movie soundtrack was released 25 May 1990 by MCA Records. Composer Mark Mancina helped write songs for the film. The score (which was composed by John Debney) was left off the commercial release, but later issued as a promotional album with his score for the television film Jonny's Golden Quest.

The song "I Always Thought I'd See You Again" by Tiffany was released as a single.

We've Got a Date

"I Always Thought I'd See You Again"

We've Got to do Something

What Can I do? 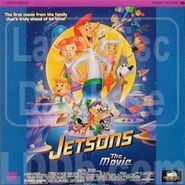