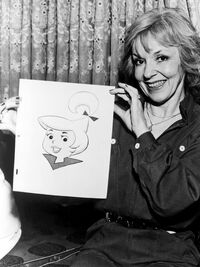 Waldo died on June 12, 2016 at her home in Encino, California at 96 years old. She had been diagnosed with a benign but inoperable brain tumor five years earlier, according to her family. the charecter that she voiced died 46 years later with the same brain tumor as janet had 46 years before