The Jetsons Wiki
Register
Don't have an account?
Sign In
Advertisement
in: Episodes, Episodes of Season Two, Holiday-Themed Episodes,
and 2 more

Mark Young
Haunted Halloween is the twenty-sixth episode of Season Two of The Jetsons, and the 50th overall episode of the series.

George Jetson tells his son Elroy and their pet alien Orbitty a scary story about a monster called The Creeper. His wife Jane arrives and, ignoring George's pleas that telling scary stories is a perfectly harmless and suitable activity to take part in when there are only a few more days until Halloween, puts a stop to the story. Jane says that the story will give Elroy and Orbitty nightmares. Although Elroy sleeps soundly, Orbitty does indeed have a nightmare. He dreams that the Jetsons live in an old dark house, that George and Judy are vampires, Elroy is a mummy and Jane is a witch. Jane enters the room, carrying a large cauldron, saying that it contains a meal prepared by their new chef The Creeper. She lifts the lid on the cauldron and a large green monster emerges, at which point Orbitty wakes up in terror.

The following day, Dr. Scarem, the owner of Scarem's Costume Shop and Waxite Museum and apparently a mad scientist, and his assistant Edgar, a hunchbacked robot who only has one functioning eye, are trying to activate the Moon Monster, a Frankenstein's monster-like robot. When they get the Moon Monster to work, it begins to dance instead of doing anything frightening. Dr. Scarem worries that without any frightening exhibits for his museum, he will soon be forced out of business. At that point he sees Elroy and Orbitty arrive at his store on a monitor. Dr. Scarem is immediately intrigued by the alien creature and thinks that he has finally come across something that could make his fortune. Elroy introduces himself to Dr. Scarem and says that he and Orbitty have come looking for costumes. Orbitty immediately feels uncomfortable and tries to flee from the store. Edgar chases after the alien and Elroy but they escape and manage to get home safely.

Meanwhile, George Jetson has been practising for a magic show which he hopes to perform at the upcoming Halloween party. His boss, Cosmo Spacely, is unwilling to let him perform such a show because his tricks have not gone well in previous years. He agrees when George says that he can fire him if the show does not go well. Spacely receives a call from his rival H.G. Cogswell, owner of the competing company Cogswell's Cogs. Cogswell reminds Spacely that each year they have a bet on which of the two of them will have the best Halloween costume and that each year Cogswell wins. Spacely declares that he is confident that he will win this year and is willing to bet ten thousand dollars on it. After the call is over, Spacely realises the enormity of what he has agreed to. George tells him not to worry because he knows of a shop that makes special costumes to order.

George arrives at Dr. Scarem's store but Scarem announces that he cannot serve George because he will soon be going out of business. When, George mentions that his name is Jetson, Scarem and Edgar suddenly change their attitude. They find out that he is indeed the father of Elroy and the owner of Orbitty. George explains that he needs a costume for his boss and a new magic trick. Scarem says that he gives magic lessons and offers to go to George's house that night to give him a free lesson.

At the Jetsons' home, Scarem explains that he is going to perform a trick in which he and Orbitty will change places. Instead of changing places, they both disappear in a puff of smoke. Elroy tells his father that Scarem is going to turn Orbitty into a statue for his museum. George goes straight to Scarem's store, demanding that Orbitty not be harmed, and discovers the truth. Scarem has no wish to turn Orbitty into a statue, he merely wants to use him as the model for a new costume which he is sure will be a great success.

At the Halloween party, George's magic show goes well and Spacely is confident that his new Orbitty costume will be better than whatever Cogswell wears. Cogswell then arrives in an identical costume. He reminds Spacely that in the event of a draw, the previous year's winner wins the bet again, meaning that Spacely owes Cogswell ten thousand dollars. Spacely is furious with George because of the costume he selected for him. Realising that Spacely would like him to disappear, George tries to preempt him by using magic to make himself vanish. George's magic backfires and Spacely disappears instead, although George believes that the disappearance will be only temporary. 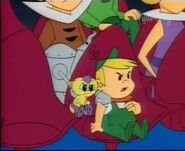 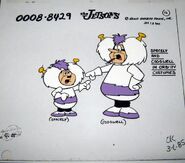