The Jetsons Wiki
Register
Don't have an account?
Sign In
Advertisement
in: Episodes, Episodes of Season Two, The Jetsonian A to Z, 1985

Elroy Meets Orbitty is the first episode of Season Two of The Jetsons, and the 25th overall episode of the series.

Elroy's class boards a school bus, having just been on a field trip on an asteroid. Three of the children are bringing home souvenirs. The robot who is letting them on board observes that Elroy hasn't boarded yet, which frustrates her, and she sends out a smaller, flying robot to look for him.

Elroy has found a rock and wants to add it to his collection, but he accidentally lets it go. Then the flying robot arrives and begins scolding him. Meanwhile, the rock bounces into Elroy's bag, making noises. Elroy notices it in his bag and begins enthusing about it, but the flying robot just picks him up and carries him.

George and Jane are watching a holographic soap opera which George dislikes, wanting to watch sports instead. Judy enters, complaining because her hair styling device broke down, messing up her hair. George switches channels, annoying Jane, so he tries to switch back but the two holo-programs get merged instead.

Rosey then enters, carrying Elroy, and his parents decide to send him to bed. Meanwhile, Astro becomes curious about the strange rock and steals it, burying it in the houseplant, but it unearths itself and bounces back into the bag.

Jane tucks Elroy into bed, asks Elroy what he wants to dream about, since he has a gadget that can control his dreams. He chooses a program called "Rocket Ranger" and she turns on the machine and leaves.

Astro falls asleep near Elroy's bed. The rock turns out to be an egg. Its legs, which look like springs, hatch out and it bounces on Astro's head and across the room. It then lands on Elroy's bed just as the dream program announces a swarm of deadly bees. Astro begins fighting the creature and Elroy wakes up, believing that he mistook Astro for the bees. Astro apologizes and Elroy says, "I know you're sorry, but what's wrong with ya?" Astro points up, as the creature is now on the ceiling. It then finishes hatching, scaring the others. However, Elroy is soon excited, but Astro growls at the creature, scaring it and making it turn yellow. Elroy scolds Astro and tells him to sleep in the kitchen, which makes him whine but he complies.

Elroy tells the creature to come down and introduces himself. The creature introduces itself as Orbitty and Elroy is excited, but Astro is still sad. Elroy and Orbitty then fall asleep.

The next morning, George has indigestion and his grooming machine puts too much shampoo and shaving cream on him. Judy thanks him for fixing her hair styling machine, but apparently he didn't fix it. George grumpily wonders if Elroy broke his grooming machine. He then opens another machine, which Orbitty jumps out of and jumps down the hall.

Judy asks what Orbitty is, and George says that he will protect her. He yells at Orbitty to leave, but Orbitty hugs him and turns orange. George tries to carry Orbitty away, but Orbitty clings to the wall with his feet and sends George flying across the room. Rosie then picks Orbitty up, mistaking him for a dust rag, and gets scared, jumping onto the table. George tells Astro to attack, but he runs away instead. Elroy enters, having been woken up by his family's noise. George says that he will protect him, but Elroy explains that Orbitty is his friend. He then explains about the egg. The platform that Judy, Astro, Rosie, and the parents are on then breaks.

George then looks up Orbitty in the encyclopedia, which reveals that Orbitty's species is endangered and the color-changing has to do with how they express emotion. It also reveals that his species is benevolent. Judy comes in and claims that Orbitty is taking the television apart. George goes to check it out and finds that the TV has been repaired.

Later, Orbitty is swinging Elroy from the ceiling, when Astro enters, wanting to play fetch. They try to play but Orbitty catches the stick before Astro. This makes Astro start sulking and whining again.

Later, the family watches Orbitty dance, while Astro sulks and imagines Orbitty replacing him in the family photo. Elroy wants to keep Orbitty but George thinks he belongs with his family. Elroy points out that since Orbitty's species is endangered, maybe he has no family on the asteroid. Astro then takes his collar off and leaves. Elroy wonders where Astro went and George says that Astro can take care of himself. However, Astro gets caught by a dogcatcher, who calls him Rover.

That night, Elroy wants to look for Astro but George is optimistic that Astro will be all right and promises a search the next morning. Elroy asks Orbitty why Astro left, and Orbitty suspects that Astro was jealous of him and accuses Elroy of ignoring Astro. He then says he can find Astro, so he and Orbitty set off.

When they find Astro, he growls at Orbitty, but Elroy explains that Orbitty saved him, then both of them apologize. However, Elroy has trouble opening the lock, and then the dogcatcher arrives. Orbitty carries Elroy to the ceiling to avoid being seen. The dogcatcher leaves, and then Orbitty breaks open the lock and they run away.

The dogcatcher then chases them and demands that Elroy hand Astro and Orbitty over, as they don't have collars. However, Orbitty uses one of the controls in the pod to trap the dogcatcher.

When they get home, the parents say that they should be angry but they're actually glad they're home. However, Orbitty worries that he'll be replaced, but George lets him stay. Orbitty goes away, but comes back and hugs Elroy. The pets balance from the ceiling and kiss each other. 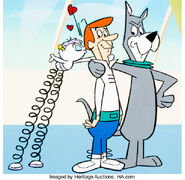 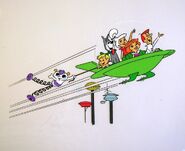 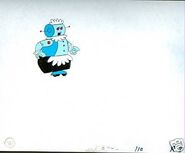